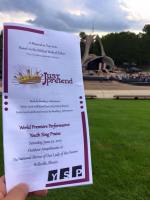 The world premiere performance of Just Pretend occurred on June 27, 2015 at the National Shrine of Our Lady of the Snows in Belleville, IL by Youth Sing Praise.

mmm
Click here to view the names of the world premiere cast!

“Awaking, Arising” finds Esther recently crowned Queen of Persia.  In this song, we see the unsure, young girl begin to blossom into the faith-filled leader she will become.

The video ofJust Pretend was screened in San Diego on Nov. 20, 215.  The audience listened attentively throughout the opening sequence as they met the key players of both Esther and Ella’s story.  But it wasn’t until the second number — “I’m Gone” — that they started moving.  By the time Queen Vashti started her first chorus, everyone was grooving in their chairs.

This scene sets up and includes the song “Faith Enough.”  Esther has just heard a decree that she is to be part of a contest to find a new Queen of Persia; her uncle, Mordechai, urges her forward despite her misgivings.

Here are some photos from the intense week of rehearsals!

Audio highlights from the performance (18:07 via soundcloud)
[For the official cast recording — much better quality — contact us!]

A PDF of a 2015 article in the St. Louis Review by a YSP alumnus on the premiere production

Photos from the Review article, just above (courtesy the St. Louis Review)